17.12.2021 Last week the Food and Agriculture Organisation of the United Nations (FAO) published a report assessing the sustainability of agricultural plastic products recommending the replacement of non-biodegradable, conventional polymers with biodegradable, bio-based polymers. 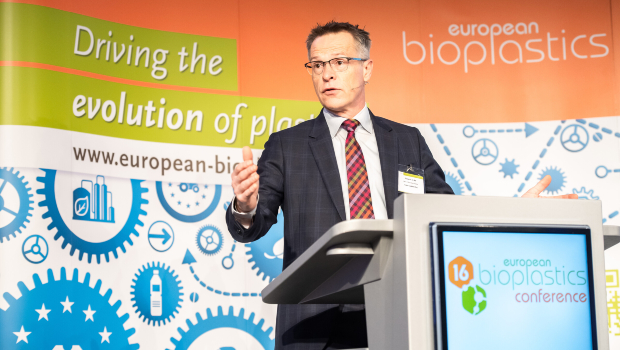 “We welcome this recognition of the environmental benefits of these bioplastic products”, commented François de Bie, chairman of European Bioplastics (EUBP). “Bio-based and soil-biodegradable mulch films help both in reducing dependence on fossil carbon sources, by using renewable carbon instead, and by playing a valuable role in reducing residual plastic pollution in soil, which can significantly impact agricultural productivity”.

Mulch films represent the second largest share of plastic films used in agriculture. “These films, made from soil-biodegradable plastics, provide significant benefits where retrieval, recycling, and reuse of conventional plastics pose significant problems. They are specifically designed to biodegrade effectively in situ and can therefore be incorporated into the soil post-harvest”, explained François de Bie. In contrast, especially thin, non-biodegradable mulching films display an insufficient collection, management, and retrieval, which can lead to a significant level of plastic pollution in the fields in which they are used. Even where conventional mulch films are removed from the field, they are often heavily contaminated with soils and plant residues, which inhibits the recycling process.

Biodegradable in the marine environment

The FAO report also emphasises the need to develop polymers that are biodegradable in the marine environment. “Although any kind of littering, should be avoided, a certain level of unavoidable loss of fishing gear will always take place. Therefore, it is important to foster the adoption of marine-biodegradable solutions”, stated the Chairman of EUBP. In the case of used products contaminated with fish residues, such as fish collection boxes, biopolymers, according to FAO, may ease the organic recycling process.

Commenting on the study, Hasso von Pogrell, managing director of EUBP said: “EUBP welcomes all studies, such as this one, that contribute towards improving knowledge of the current data situation. This can’t be done by the bioplastics industry alone, and in order to establish a proper data pool, we also need stronger political support. For the European market, the European Commission should lead efforts to facilitate and coordinate data pooling in order to develop a more accurate picture of where the use of bioplastics brings real benefits in reducing conventional plastic pollution”. The report also highlights the role of research and innovation grants as means of pump-priming new ideas which lead to the development of new products. “However, the funding of research alone is not enough. An appropriate policy framework for bio-based, biodegradable and compostable plastics is also needed, to capture potential for innovation and the economic, environmental and societal sustainable benefits of these products for the European Union,” concluded von Pogrell.