13.12.2022 One of the Czech Republic’s largest label converters, Colognia press a.s. has continued its investment in Martin Automatic technology with an MBSF unwind splicer and LRD rewinder with slitting capability fitted to its new Gallus Labelmaster 440 press at Kolin, some 70km east of the country’s capital city, Prague. The new equipment joins previous Martin nonstop unwind and rewind technology fitted to Colognia’s Gallus RCS 330 presses in 2010 and 2015. 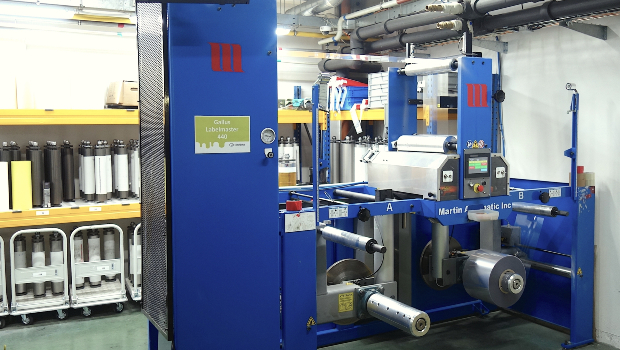 © Photo: Martin Automatic
The latest Martin MBSF unwind/splicer has been installed in reverse to facilitate roll loading as it is located tight to an exterior wall.

Established in 1996 and still privately owned, Colognia press now employs 140 people and sells its labels, shrink sleeves, and flexible packaging to 18 different countries including the USA, Mexico, and Argentina. But most of its business is in Central and Western Europe, with the strongest markets in the German speaking countries. Major market sectors served include food and drink, chemical and cosmetic, and pharmaceutical, but the company also satisfies demand for its products from the automotive, electrotechnical and logistics areas.

According to Production Director, Dušan Převrátil: “Around 50% of our output by volume is self-adhesive labels, with blank labels and laminated tubes making up another 30% – flexible packaging, peel-off labels and shrink sleeves make up the rest.” The company has seen turnover grow from under €10m in 2013 to more than €20m in 2021, and the graph continues upward, although there has been a degree of stagnation this year with material supply issues.

Colognia press is well equipped for self-sufficiency, with its own in-house DtP studio capable of making Asahi flexo plates (up to 174 lpi) and its own screens. In addition to its four Gallus flexo presses, it has a digital print department that includes a Gallus Labelfire flexo/hybrid, an HP Indigo WS 8600 and an EFI Jetrion 4900 ML. “As you can see, we have a machine for most requirements and an extensive product portfolio that embraces a variety of different substrates. The key to it all is single-pass production inline, and for that to be most effective we need to automate roll handling,” he added.

The first Martin Automatic equipment installed at Colognia was back in 2010, when an MBS non-stop unwind/splicer and twin-spindle LRD rewinder with auto-transfer capability were installed to work with the company’s newly acquired Gallus RCS 330 combination flexo/screen servo-driven press. The Martin machines allowed non-stop production on the highly sophisticated Gallus press, which was essential for the pharmaceutical market where point sizes were small, and characters needed to be reproduced accurately.

Payback of less than two years

With a rapid payback on the Martin investment of less than two years, it was a simple decision to make in 2015 when Colognia press installed a second RCS 330 press. This time, with less floorspace to work with, Martin’s compact MBSC and STR models offered the perfect solution. By replicating non-stop capability on its Gallus presses, Colognia was able to offer the all-important back-up capability that many of its customers demand and improve the overall quality of its printed products. Speaking for Martin Automatic, European sales manager Bernd Schopferer commented: “With their compact dimensions and full features, our MBSC (C for Compact) and STR are specially designed for smaller production environments, but they still offer fully automated roll handling for continuous running. This is another example of Martin’s tailor-made engineering.”

And it is this capability of Martin to adapt its technology to any situation that came to the fore when the latest investment was put in place. Already tight for space and actively seeking larger premises, Dušan Převrátil had no option but to install the new Labelmaster with its operator side close to an external wall. The problem was that this left insufficient space at the infeed end of the press for the operator to bring the blank rolls into the Martin MBSF unit on the same side. The solution was simple. Martin supplied a reverse direction unwind/splicer that allows the rolls to be loaded from the opposite side. However, this posed another problem for single-person operation, because while the new roll was being loaded, the operator could not see what was happening on the press. This solution was simple too, with a camera fitted at the delivery end of the press feeding a monitor on the opposite side at the Martin MBSF unit.

The result dovetails well with Colognia’s declared business model that is based on Lean Manufacturing, Automation, Smooth B2B Processes, and Continuous Performance Improvement. The company is proud of its internationally accredited standards that include ISO 9001, EMS 14001, ISO 45001, DPG, and FSC. Its awards include ‘Packaging Company of the Year’ on three occasions – for Braille on Laminate Tubes in 2010, for Shrink Vinyl Labels in 2018, and for Laminate Tube printing in 2020. It was also voted a ‘Responsible Company of the Year in the Czech Republic 2018’.

There is no doubt that Colognia press has one of the most diverse production capabilities in the narrow web sector, both in terms of printing techniques and converting options, all offered on various web widths. This has been fundamental to its success and development, along with its location in central Europe with potential markets at all points of the compass.  Its flexibility and innovation are obvious from its product portfolio – what is less visible is its dedication towards process optimisation – something in which Martin Automatic technology has played a strategic part. Concluding, Dušan Převrátil said: “It’s no wonder Martin is the industry’s preferred choice for nonstop automation – it’s reliable, easy to use, and makes an immediate difference to productivity and profitability – I believe our working partnership has been good for both companies!”

Responding for Martin Automatic, Bernd Schopferer commented: “Colognia press is a perfect example of customer and supplier working together to achieve the best solution. All three Martin installations are different. The first was a straightforward MBS/LRD, the second was an MBSC/STR because a lack of floorspace, and the most recent is an MBSF working in reverse to facilitate roll loading, and an LRD with inline slitting capabilities for multiple ribbons and edge trim. Good business for both companies!”