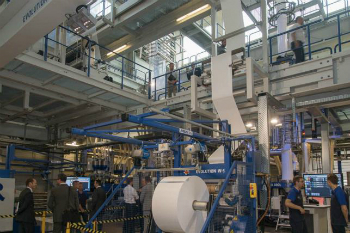 Reifenhäuser Blown Film, a division of the Reifenhäuser Group, hosted an open house at the company headquarters in Troisdorf, Germany, during the drupa tradeshow. A multitude of customers from around the world attended the event to learn about new opportunities in the application of film extrusion technologies.

Three state-of-the-art blown film lines could be viewed running in production. A special highlight was the EVOLUTION Ultra Flat technology, which has become a convincing selling point. Eugen Friedel, senior sales manager at Reifenhäuser Blown Film, commented: “Film flatness imperfections occurring in the production of packaging films are inherent in blown film processes. Especially in the conversion of these films they can cause serious problems. With EVOLUTION Ultra Flat featuring minimum stretching of the film via heating-cooling rolls, it is possible to produce a web perfectly flat for subsequent winding and conversion.”

The enhanced efficiency covers the entire value chain: “All steps in the production of packaging films, such as lamination, printing, re-forming and sealing, clearly benefit from the optimised web flatness.” Three lines with Ultra Flat were sold during the open house.