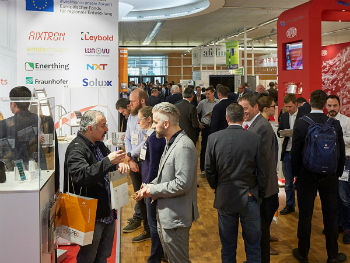 The organisers of LOPEC 2017 were very satisfied with the event (photo: Messe München)

From March 28 to 30, 2017, LOPEC proved in Munich, Germany, that the interest in printed electronics continues to grow. The ninth edition of the international exhibition for printed electronics set new records across the board, while also showcasing numerous world-firsts. Concurrently, the LOPEC Conference impressed with a top-class, highly international line-up, featuring speakers from Samsung and the European Commission.

Falk Senger, Managing Director of Messe München, is delighted with the result: “The record numbers of exhibitors and attendees clearly reflect that the industry is developing in the right direction. Printed electronics has reached new dimensions, as was plain to see at LOPEC this year.”

More than 2500 participants from 47 countries came to Munich for the three days of the event, which equates to an increase of 20% compared to the previous year. LOPEC 2017 once again proved why the event is considered world-leading, with a truly international feel: 54% of exhibitors come from abroad, with the best-represented countries after Germany being the Republic of Korea, the United Kingdom, and the United States. The event also played host for the first time to a 40-strong delegation from China. And the journey was certainly worthwhile, as the independent visitor survey conducted by forschungplus shows: 89% of respondents would recommend the event.

Henri Rajbenbach, project officer and senior expert at the European Commission, sums up his visit to LOPEC: “Platforms like LOPEC help to ensure that the European technology sector keeps on innovating and retains its place among the world’s leading.” He continues: “The EU sees large-area electronics as the key technology for the electronics industry. To this end, we will support projects in this sector with an additional 40 to 50M Euros by 2020.”

LOPEC broke new ground in terms of exhibitors and floor space, too, with 154 exhibitors from 17 countries representing an increase of four percent compared to last year's event. In fact, this year’s exhibition was also 8% larger in terms of space: It was fully booked down to the last stand, with numerous series products on display alongside prototypes. These include a multi-functional jacket with electroluminescent lighting elements by Helly Hansen, an Audi TT with OLED tail lights, and a smart ring that notifies the user about whether they have gotten enough sunlight.

The next LOPEC will take place in Munich, Germany from 13 to 15 March, 2018.
Top Companies