29.11.2019 "Innovation Hub - Taking off together" was the motto of the iT.CONnect directly at Munich Airport in the Hilton Airport Hotel. The decisive topics: Digitisation, efficiency, cultural change and the future. 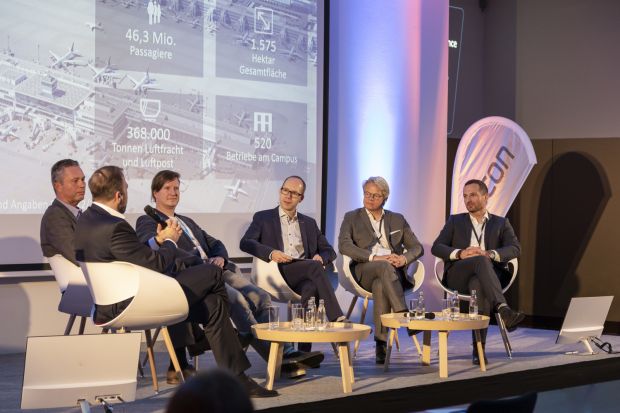 For two days, over 200 customers, partners, decision-makers and IT experts from T.CON exchanged digitisation knowledge at this year's SAP Gold Partner T.CON symposium. In addition to workshops, the programme included 28 speakers on the main stage and 31 speakers in the Innovation Area. In total, keynote speakers, managing directors and experts, partners and customers of T.CON gave almost 50 presentations. A festive evening event on the occasion of the 20th anniversary of T.CON rounded off the conference programme.

The conference started with a discussion on efficiency as a goal of digitisation. "In view of market changes and cost pressure, efficiency increases play an important role in many industries," explained Thomas Blöchl, COO and member of the T.CON management board. "The challenge is to identify process improvements, for example in production, in order to become more efficient. The technological means are now available."

The reports from T.CON customers such as Rapunzel and the Koehler Group also focused on the topic of leveraging efficiency potentials with the help of digitisation. The conference also provided information on how the SAP experts at Flughafen München GmbH (FMG) evaluated technological risks and prepared four million lines of code for SAP S/4 HANA Conversion.

However, culture has always played an important role in the reports on digitisation projects. One example of this was the digitisation of human resources at the Brückner Group. There, SAP SuccessFactors is deliberately used in the cloud to harmonise the inconsistent processes of five subsidiaries with data protection requirements. But the employees in the personnel departments also had to relearn as a result. The same applies to the employees of ODW Elektrik, who now process the Product Lifecycle Costing (PLC) of their components directly in SAP.

In both projects, T.CON experts succeeded in scoring points not only with technological and process-related arguments. The users were also convinced. "New thinking is even more important in digitalisation than before," said Karl Fuchs, member of the management board and CEO of T.CON GmbH & Co. KG. "To take away people's fear of change is the decisive success factor".

Industrial IoT made by T.CON

In addition to the willingness to embrace change, the use of innovative technologies in digitisation is also a key success factor. These include industrial IoT solutions such as the SMART IOT platform from T.CON. Projects in which AI-controlled microservices are used for machine control in production in the paper industry were presented. In more than 20 workshops, T.CON experts presented further solutions based on SAP that help companies to design digitisation economically.

Exciting keynote speeches by futurologist Sven Gábor Jánszky and the CTO of SAP Germany, Glenn González, rounded off the content of the conference. The iT.CONnect ended with another keynote speech by Pilot Philip Keil. The management and the organization team are looking forward to seeing all visitors again next year.