22.02.2022 The prices of materials often used for flexible packaging continued to accelerate in the final quarter of 2021, due mainly to the spike in energy costs, which began to increase dramatically after August, according to Flexible Packaging Europe (FPE). On-going shortages of some raw materials and supply chain disruption also continue to have an impact on availability and costs. 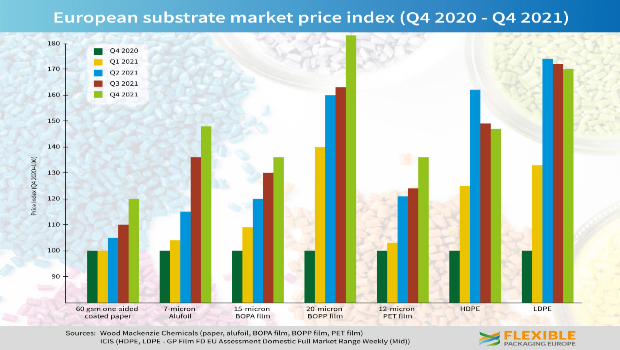 While the steep increases seen in Q2 eased slightly in Q3, the rate for 12-micron PET (+10%), 20-micron BOPP (+12%) and 7-micron Aluminium foil (+9%) were all significantly up again in Q4 and ended the year at record levels compared to the end of 2020. Twenty-micron BOPP now costs over 80% more than one year ago, while 7-micron alufoil is up almost 50%. The 12-micron PET grade and 15-micron BOPA films are both more than 35% higher. On a positive note, both LDPE and HDPE prices slightly fell back 2% compared to the previous three months but are still respectively 70% and 48% above the prices of Q4 2020, according to the latest figures issued by ICIS and Wood Mackenzie Chemicals.

David Buckby, Senior Analyst at Wood Mackenzie commented, “A major feature of Q4 substrate price dynamics has been the contribution of rising energy costs, which began to increase at the start of 2021 and have accelerated sharply since August. To put this into perspective, energy costs in BOPP film production in Q4 were almost six times higher for some manufacturers compared to the average of the past four years, now representing almost 20% of total costs.”

“The volatile environment has meant an increased preference by film and resin producers for monthly contracts rather than longer-term agreements with quarterly reviews,” he added.

Demand continues to be strong in most markets, according to FPE, but the difficult supply chain dynamics identified earlier still apply. Volatility in oil prices and availability and cost of ancillaries, such as adhesives, inks and solvents remain problematic for the time being. Primary production and supply of aluminium is still disrupted, and aluminium foil conversion costs have increased by approximately 50% compared to one year ago. Wood Mackenzie’s understanding is that a new round of discussions in Q4 were taking place largely for further increases to be applied in Q1.

Guido Aufdemkamp, FPE’s executive director, expressed the hope that things would begin to improve in 2022. “There are some signs that aluminium production is coming back on stream and oil prices may be stabilising. The continuing downward trend in LDPE and HDPE prices is encouraging, but prices across all flexible packaging materials remain significantly above 2020 levels. Supply chain factors should also improve in the course of 2022. But external factors, such as spiralling energy costs due to geopolitical circumstances could easily blow off course any sustained recovery, so we remain vigilant. Flexible packaging suppliers have done very well to maintain levels of supply and delivery through the pandemic, and the membership hopes to be able to adapt to any future circumstances,” he said.