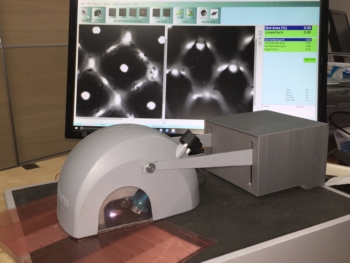 Sibress, manufacturer of measuring and analysis systems for the quality control of flexographic and packaging printing from Starnberg, Germany, brings an innovative plate measuring device on the market with the mobile FlexoControl 3D Plus for the analysis of production parameters during flexographic plate production. The easy to use system can measure grids on flexographic plates as fine as between 30 and 85/cm (80-216 lpi).

FlexoControl 3D Plus has an innovative optical system with increased optical enlargement, which better and more precisely captures the side and flank view of the grid points. The tool was also further developed to measure relief depths, flank angles as well as – particularly important – the base (ground area) of the printing points.

Sibress FlexoControl 3D Plus is the only flexographic measuring device in the world that simultaneously captures the surface as well as the lower areas of grid points and their base from the side. Two cameras record the surface and flanks of the grid points, whereby the side camera can detect the entire visible area thanks to a newly developed method. The new aperture control of the side camera additionally permits the exact adjustment to the lighting or the requirements of different plate materials and grids. Both functions together make it possible to show every point in the image in razor sharp resolution, to display the finest details and ensure a high level of measurement accuracy.

All grid points in the active measuring range are captured and analysed and evaluated by the Versatile@flex-software. Thanks to the split screen mode, images can be compared directly with each other. The user sees the evaluation of parameters such as the grid tone value, grid width, point diameter as well as point scope on the one side. The grid point is shown from the side in the window next to it, which can be evaluated with the further developed tool for geometric measurements. Other functions include the measurement of colour controls, CMYK evaluations, statistics, the saving of measurement curves or the automatic creation of measurement protocols with images in PDF format.