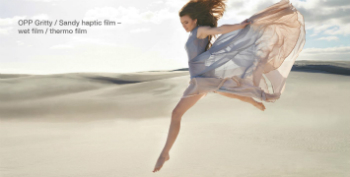 This spring, pfc premium film company GmbH (Hamburg, Germany) has launched a film product that has not been available on the German market before. The film with the name Gritty/Sandy has a non-slip, grainy texture. In addition, the product is protected by its high stability. The sandy pfc film is therefore mainly used for paperbacks, files and slipcases as well as for packaging luxury consumer goods.

Today more than ever, consumers are exposed to countless stimuli. All the more reason for companies to set themselves apart from the masses with their products and services and to evoke positive emotions. In neuroscientific studies the advertising effect of high-quality special prints was tested against less selected papers. The result: consumers regard print products with effect foil much longer than those laminated with normal foil. The motivation to buy also increases significantly.  The positive emotions triggered by the rough feel of the Gritty surface not only increase interest in the product but also promote brand loyalty.

The unusual granular surface of Gritty/Sandy stands out visually and invites you to touch it. In the USA, paperback manufacturers have long relied on this interesting effect for book covers. Effect film also supports the advertising message in the packaging of luxury products. An example: as a manufacturer of cosmetic peelings, a granular packaging surface already provides information about the contents. Like all pfc films, it is compatible with lacquers and can be completely hot stamped, glued and printed without any problems.

"pfc has been able to position itself on the market as an innovation leader for many years. With Gritty, we are continuing on this path," says Heike Lammers, head of pfc premium film company GmbH. In October 2018, pfc premium film company GmbH unveiled its Eco Star eco-product at Fachpack in Nuremberg, a film made from sustainable raw materials that is 100 percent compostable. The market leader is now fulfilling its desire for increased customer attention with the newly launched Gritty/Sandy effect film.