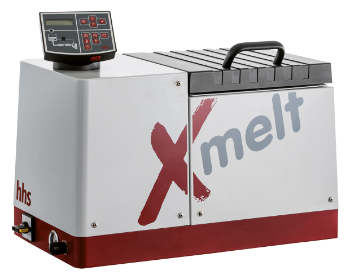 The industrial gluing systems manufacturer Baumer hhs GmbH, based in Krefeld, Germany, is attracting considerable attention in the market with its Plug & Glue concept, developed for its Xmelt family of hotmelt systems for the purpose of system optimisation and preventive maintenance. For example, the corresponding patents on this technology – which offers customers decisive advantages in terms of ease of use, maximum operational reliability and optimum results in glue application – have been cited unusually frequently in other published patent applications.

The Plug & Glue systems are based on hardware/software interaction, where the hardware provides identification codes and operating parameters with the help of data chips. In other words, all hotmelt application heads and hoses on the Xmelt systems from Baumer hhs are equipped with individual data carriers. The system uses the data they store to keep operation within optimum range. This applies to optimising temperature control, for instance, key influencing parameters of which include the heat-up time of the hot melt system, the control deviation values, and specific component characteristics, such as the length, heater resistance and position of the temperature sensors.

Depending on the application and its requirements, a variety of different hot melt hoses and application heads with variable heat output levels and control modes can be connected to the Xmelt family of hot melt units. In practice, a hot melt system’s original configuration is frequently modified later on, for example when the demands imposed on production change, or component failure makes it necessary to connect replacements with different characteristics.