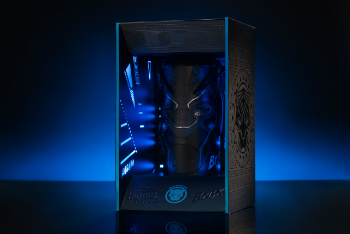 When the worldwide release of "Black Panther" by Marvel Studios from the USA was celebrated on 15 February, packaging played one of the leading roles: With a spectacular packaging of the iced tea "Brisk", film sponsor PepsiCo (USA) made the event appealing to his opinion leaders. Perfectly aligned to the look & feel of the cult film, the packaging represents "Black Panther" with all senses. The packaging was produced by the packaging specialist Karl Knauer Group from Biberach/Baden, Germany.

“This project goes beyond everything we have ever developed and produced," says Martin Glatz, marketing manager at Karl Knauer, commenting on the extraordinary project. “Together with PepsiCo and Marvel Studios, we have launched an unprecedented fireworks display of refinement art in a network of strong partners such as "buch exklusiv" and "Highlight Media.”

A can of the PepsiCo brand "Brisk", highly refined in 3D printing and designed like the film hero "Black Panther", is situated on a small "stage" with fold-out side panels in the look of the interior of the high-tech stealth ships from the film. Embossing in all facets, a 20-second light choreography and sophisticated folding mechanisms create the surprising effect that results from the opening of the completely black packaging.

Based on the newly developed and patented HiLight - smart LED technology, a spectacular light installation was integrated ultra-thinly into the three rear walls. Pressing the Black Panther logo starts the light show in five separately controlled zones, which can be restarted at any time. Visually and haptically adapted to the original look of the film show "Wakanda", the packaging was made of solid cardboard, finished with 3D-UV varnish on natural cardboard.

As an addition, a replica of the bracelet with the "Kimoyo pearls", which are familiar from the film, is packed in a highly refined solid cardboard box with lasercut foam insert.

The entire set is also sustainable: the batteries can be replaced in an easy-to-open compartment for a long-lasting, environmentally friendly lighting effect. “The luminous Black Panther packaging is unique in all respects, immediately provokes a high degree of desirability and is sure to become a coveted collector's item," Martin Glatz is convinced.