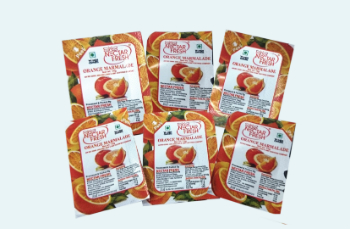 Cosmo Films Limited, a leading manufacturer of specialty BOPP films based in Delhi, India, announced the launch of BOPP-based universal lidding films that are suitable for heat sealing to any of the rigid thermoformed cups/containers made up of PP/HIPS/PET/PVCor, and PE. The films are generally used for lidding of unit packs of packaged drinking water, juice, yogurt, jelly, jam, marmalade, butter etc., as well as trays used for packing salads, meals and fresh fruits etc. The different products available in the market for lidding generally are aluminum foil/PE or PET/PE structures. However, BOPP used for lidding applications scores over its counterparts in terms of sustainability, yield and therefore cost, better aesthetics and fold/flex resistance.

These films are available in white opaque cavitated & semi-transparent variants. BOPP film based lids are safe for direct food contact as no solvent is involved and ingredients involved in the manufacturing of this product are approved by FDA. The films are reported to offer excellent peelability, printability with water & solvent based inks and high aesthetic appeal. The films offer good moisture barrier properties and films to cater high barrier needs are also available. The new films can be easily die cut & punched and display good stiffness for dispensing.  They can be used for both in-line and offline lidding processes. The product is available in standard thicknesses of 50, 75 and 85 microns. Other specifications are also possible on demand.

Commenting on the development, Pankaj Poddar, CEO Cosmo Films, said: “We saw both end consumers and printers facing challenges while using unit packs especially for packaged drinking water. The consumers invariably found it challenging to peel open the pack without spilling and the label printers faced issues with finding the right adhesives for heat sealing of the lidding film. Looking at the need gap, we have developed a cost effective universal product where all that the printer needs to do is to print, die cut and supply the film to the brand. The film can also be sealed at lower sealing temperatures of 140-150°C”.