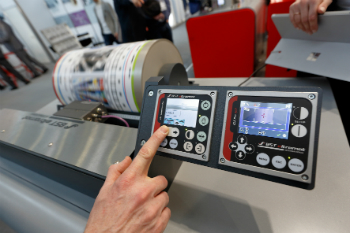 Visitors were impressed by the uniquely convenient operation of the ekr 500 digital Unit Touch controller with the innovative Commander and the CLS Pro 600 digital sensor (photo: BST eltromat)

At ICE Europe 2019, BST eltromat International GmbH (Bielefeld, Germany) presented new options for automatically positioning the CLS Pro 600 digital sensor with an FVG POS 100 sensor positioning device, making it even easier to set up web guiding systems. Machine operators have a number of options here. They can either manually enter the position data for the digital line and contrast sensor via the ekr 500 digital Unit Touch controller, or take over the position data via bus protocol directly from a higher-level PLC, in which this data is stored in recipes, for example.

“All of the options streamline the process of setting up the web guiding system even more. This further increases the availability of production machines. If the position data of the lines or contrasts to be scanned are automatically transmitted from other systems or stored orders, the set-up times in the web guiding system can be reduced by up to 40%. At the same time, this eliminates input errors. The result is higher operational reliability, which yields less waste,” said Ingo Ellerbrock, head of product management at BST eltromat, stating the main benefits for integrating the three key components of the web guiding system. The term “Industry 4.0” stands for digitalisation and networking production processes with the goal of significantly increasing efficiency. “The automatic setup of the web guiding system via our linked components is the basis of effective production process improvement.”

BST eltromat mainly developed the FVG POS 100 to control the edges and centres for wide web materials. The innovative sensor positioning device is mainly used where frequently changing web widths are used, web guiding controllers are installed in locations that are hard to access within machines, and/or where a high degree of automation is required.

At ICE Europe 2019, BST eltromat demonstrated the convenience of automatically setting up a web guiding system with an exhibit where example job data was scanned via QR codes. They contained both position data for the sensor and recipe data. After scanning, the CLS Pro 600 digital line and contrast sensor automatically moved to the specified positions thanks to the sensor positioning device and set itself up automatically. Visitors experienced the efficiency and safety of the web guiding system setup process. They were also enthusiastic about the uniquely convenient operation of the devices. The ekr 500 digital Unit Touch controller with the innovative Commander is operated intuitively via a touch screen. By using it, operators can easily switch between different views such as web width status messages, and the web position offset setting in a new way. The self-explanatory representations on the display always offer only those options that make sense in the individual situations.

At this year’s LABELEXPO EUROPE in Brussels and K Show in Düsseldorf, BST eltromat will use similar exhibits to show the simplicity and efficiency of the setup process in web guiding with the FVG POS 100 in combination with the CLS Pro 600 digital sensor and the ekr 500 digital Unit Touch controller.