13.07.2021 Founded by Raul Teixera and a partner in 1987 in Porto on Portugal’s Atlantic coast, Lemorau has grown into a significant manufacturer and supplier to the narrow web label sector with a portfolio of technology that ranges for simple core cutters to slitter/rewinders, inspection machines, die cutters, and more recently, machines for inline printing and finishing. 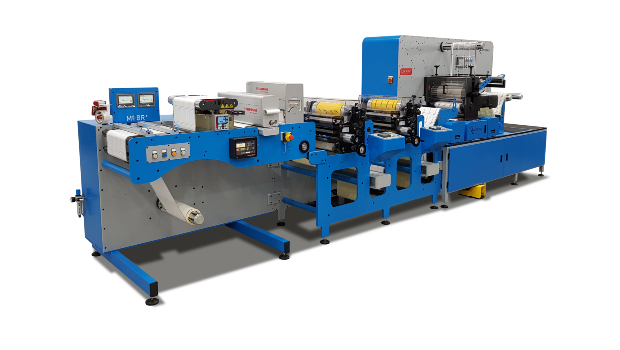 Early years saw the company develop a reputation for well-designed and solidly built equipment that was sold principally to the domestic Portuguese market, and it was not until the company exhibited at Labelexpo Europe in 2013 that its technology became known to and readily accepted by a wider international market.

Continuous expansion of the business

Sales & marketing manager Natália Lopes takes up the story: “Until 2004 we had produced only flat-bed machines before moving into rotary technology for die cutting, blank separation and slitter/rewinders. By 2009 we had extended production into auxiliary equipment for the label sector, including core cutters and roll lifters.  But it was exhibiting at Labelexpo that really kick-started the business following our first international sale to an Italian customer in 2012.”

Building on its reputation for quality engineering and reliable performance, Lemorau developed semi-rotary machines and continued to improve and refine the mechanical and electronic aspects of its machines. Another showing at Labelexpo, this time in the USA in 2016, saw a boom in demand from American label converters, who appreciated the sturdiness of Lemorau machine construction and its economy of operation. Encouraged by this, by 2018 the company had developed and launched a new modular concept line that allowed it to tailor the specification to meet the exact requirements of its customers.

While the base configuration of the new customisable line remains the same, but undergoes continual development and improvement, Lemorau offers a list of optional equipment that includes flexo and screen printing, hot and cold foiling, embossing, automatic slitting-knife positioning, an easy strip waste rewinder, and turret rewinding, amongst others – and those others include web cleaning and surface treatment.

With the need for web treatment came the introduction to Vetaphone. Natàlia Lopes explained: “We had known of the company by reputation from the early 2000s and knew that it was the go-to choice of most narrow web press manufacturers and converters, so when the time came to choose a supplier, it was very much a ‘no brainer’ for us!” Launching its new line at an Open House in 2019, Lemorau fitted a Vetaphone Web Cleaner and Corona Treater to its new demonstration line, and promptly sold three machines!

“We have to ensure the web is in the best condition possible for printing and varnishing and need to match the quality of the ancillary equipment we fit to that of our own. So, either the customer requests Vetaphone because it’s the market leader, or we recommend it for the same reason,” she quipped. As an OEM, Lemorau is well aware of the importance of easy integration with its sub-suppliers. Where even the smallest link in the chain is crucial to productivity, Lemorau knows it needs to trust the entire installed assembly. “Our customer feedback has always been good, so we know we’re doing things right,” she said.

Today, Lemorau operates from a modern production unit close to Porto’s international airport (OPO), making transportation and logistics easy for the 75 or so countries across five continents it now sells its machines into. Its young and dynamic team prides itself on its ongoing innovation and dedication to customer service and support, which no doubt accounts for its high user rating. Currently manufacturing around 200 machines per year, it has ambitious plans and is looking to grow through an expanding network of agents and distributors, without losing any of its reputation for close customer relationships.

Speaking for Vetaphone, the area sales manager for Iberia, Karsten Koch, commented: “We’re at the very beginning of our working partnership with Lemorau and can foresee exciting times ahead with its plans to develop a product range that is already well known and appreciated by the narrow web sector. Vetaphone is looking forward to playing a significant part in Lemorau’s future development because we see a strong synergy between our respective companies.”