15.06.2022 The cost of plastics, aluminium, paper and liquids materials used in flexible packaging reached new, record levels in the first quarter of 2022, maintaining the strong upward surge in prices seen throughout 2021, according to Flexible Packaging Europe (FPE). Continued pressure from soaring energy costs, as well as other external factors, means the dramatic increases seen in the last half of 2021 have now been exceeded. 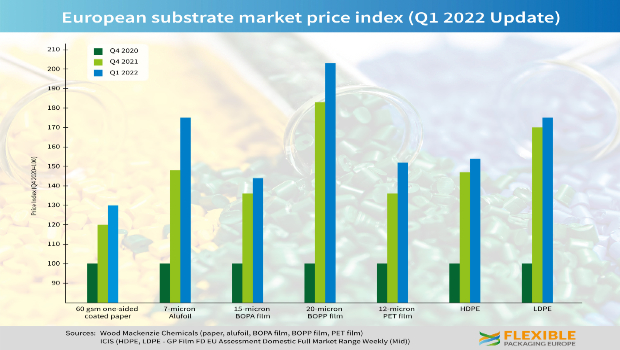 In particular the cost of 20 micron BOPP film shot up 45% during January to March 2022 and has now doubled in price since the first quarter of 2021. Thin aluminium converter foil also jumped by 67% in the same three months and is now 75% higher than the end of 2020. Elsewhere, 12micron PET added 47% in the same period to stand 50% higher than just over a year ago, while 15m micron BOPA film added 33%, marking a 44% increase in 15 months.

Commenting on the figures, David Buckby, senior analyst at Wood Mackenzie, said: “Substrate prices across the board continued to rise sharply in Q1, driven primarily, in many cases, by energy surcharges. Limited availability of materials also propped up prices, made worse by ongoing global logistics challenges. The high cost and unpredictability of offshore sourcing means that European producers were generally busy, with some fully booked and not accepting new orders.”

“Lead times for aluminium foil in Q1 were as long as five months compared to two months previously. For paper, they were often two to three months, up from four to six weeks. The extent of price increases from supplier to supplier depended heavily on the scope of previous hikes – timings do vary. Some producers which pushed through substantial energy surcharges and price rises in Q4 pushed for only moderate hikes or even rollovers in Q1,” he added.

FPE sees continued strong demand for all flexible materials as growth indices for the markets its members serve all remain positive. However there has been a general slowdown in the pace of growth, which may take some pressure off already stretched supply shortages of raw materials and ancillary products, such as adhesives and inks. Logistics and utilities pricing increases had and will continue to have a large effect on conversion costs to flexibles packaging converters. After a brief pause oil prices are now increasing again, so this may weigh on any respite from continued flexible material price hikes.

Guido Aufdemkamp, FPE’s executive director, thinks it is difficult to forecast the direction of the market in current circumstances. “Growth in demand in Europe for flexible packaging is almost certain. While the price increases could have an impact on the levels of demand this is unlikely as non-flexible packaging applications are faced with higher absolute increases per pack as more material is used. Add the continuing supply chain disruption and major energy issues to the equation and the outlook is uncertain. The conflict in Ukraine and the economic consequences of it across Europe were not something we could predict or anticipate. However flexible packaging producers have proved resilient in the past, most recently with the pandemic, so we are confident the sector will continue to be able to meet demand for its products.”