05.09.2019 Three months before Labelexpo Europe 2019, Prati had invited the label industry to its headquarters in Faenza to give interested customers, partners and suppliers an outlook on the highlights of the upcoming fair in Brussels. 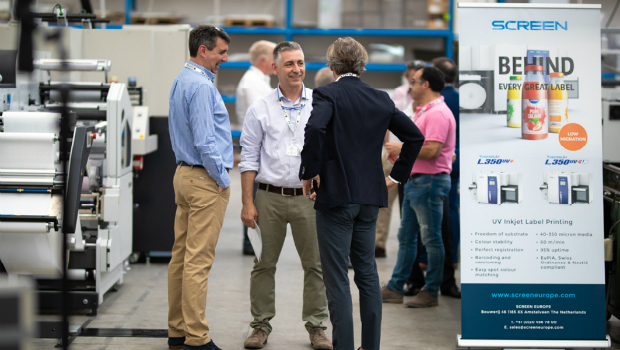 © Photo: Prati
One result of the close cooperation between Prati and Screen Europe is the DIGIFAST one system.

From 11 to 13 June, more than 100 international visitors from the United States, Great Britain, Thailand, Portugal, Canada, Germany, France, Austria, Russia and Turkey followed this invitation in addition to interested parties from the home market Italy. Overall, Thorsten Saathoff considers the participation to be a great success due to the proximity to Labelexpo. His company, Nilpeter GmbH, represents Prati in the German-speaking market.

The open-house event was held under the motto 'Hybrid Technology Experience' and therefore offered an opportunity to find out in detail about machine systems that combine several processes. The digital conversion line DIGIFAST one deserves special mention, says Andreas Höfner, managing director of the Vienna branch of Nilpeter GmbH, who was on site during the open house event. The system, which achieves production speeds of up to 90m/min in semi-rotary mode, was presented in two different hybrid configurations. It is based on Futura technology and has a completely modular design. Depending on requirements, it can be combined with a variety of printing and finishing processes. Thorsten Saathoff cites as a special example the integration of a pre-treatment module (inline priming), which expands the variety of substrates that can be used. In addition, units for flexo and inkjet printing can be combined to achieve additional effects.

Prati worked closely with Screen Europe to develop DIGIFAST one. The cooperation will be further expanded in the future, as Carlo Sammarco, sales director packaging solutions at Screen Europe, explains. According to Sammarco, users expect flexible production technology with which they can optimise their processes. Solutions must be geared to this and be available as a needs-based constellation from 'stand-alone' to 'nearline' to the complete 'hybrid' configuration.

Another DIGIFAST system celebrated its premiere at the event and will also be in the spotlight at the Prati stand at Labelexpo in Brussels. The DIGIFAST 20000 has been specially designed for use in conjunction with the HP Indigo 20000 digital printing solution for label and packaging printing, and its features are tailored to the finishing of digitally printed rolls in this segment. In addition to the technology and numerous networking opportunities, the culinary advantages of the region with its vineyards and local specialities were not neglected.

Prati, with headquarters in Europe and America, has more than 3000 machines installed worldwide. During the Open Days, it was also announced that the company, originally founded in Marradi and now based in Faenza, is planning to expand in the coming months with a new location.