12.11.2019 Mehner & Rust Etiketten GmbH (MRE), based in Lichtentanne, a small town between Plauen and Zwickau in Saxony, can trace its roots back to the period immediately after the fall of the Berlin Wall in 1989 when the Communist East Germany suddenly emerged into the capitalist western world. 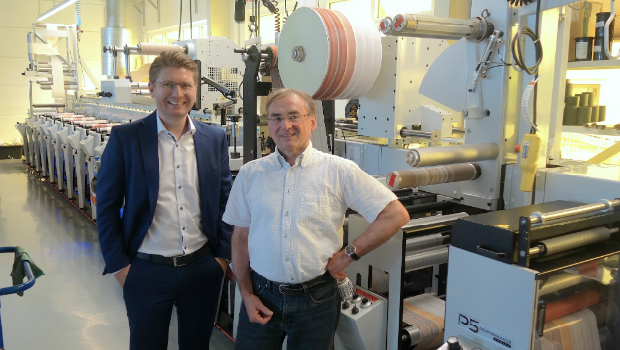 © Photo: Mark Andy
Timo Donati with MRE’s Klaus-Dieter Rust and the new LED-UV equipped P5, which is viewed as a key element in the company’s long-term strategy.

Founded and still owned and managed by Heiko Mehner and Klaus-Dieter Rust, the company began life as a label broker before moving into production with a variety of second-hand letterpress technology which served it well and allowed it to grow and build a solid customer base.

On a path of innovation

But it was the quality that modern narrow web flexo presses could offer that set MRE on a path of innovation. Klaus-Dieter Rust explained: “We needed to establish a long-term strategy to take the company forward, and having previous experience only of older equipment, we were very open-minded with regard to what the latest presses could offer. In particular, we saw the value of LED curing for UV work, and began to investigate the market.”

MRE contacted all of the leading narrow web manufacturers about LED, but the only one to show a positive approach was Mark Andy, which has pioneered the market by partnering with Phoseon Technology and Flint Inks. Timo Donati, Mark Andy’s sales manager for Germany took up the story: “We had begun developing this working partnership back in 2015 and could demonstrate the technology in everyday commercial use, which allayed any fears that MRE had developed from the lukewarm attitude of our competitors.”

Far from unproven and expensive, the LED-UV system offered by Mark Andy came with full support and training from the three constituent manufacturers. “We were really impressed with the assistance and tuition we received, from how best to plan the work, up to the daily operation of the system,” added Rust whose company had by now installed a Mark Andy Performance Series P5 press. The new P5 is a 13” (330mm) model with eight Pro-LED UV print stations, a Gizmo, three die stations and a sheeting unit. In fact, the leap in flexibility and performance of the Mark Andy over MRE’s existing technology came a major surprise.

“From the time we ran print trials at the Mark Andy demonstration facility in Warsaw, we were convinced that LED was the way ahead, and having had the press in use at our own plant I can state that it was clearly the right move for us – in fact, it’s capability has already attracted new work from customers who were experiencing curing issues with varnish,” he said. The P5 has replaced three older presses and added capacity, at the same time as reducing energy costs by 50%. The company has also had to rethink its pre-press and plate technology as well as sourcing new substrates suppliers to cope with the P5’s superior performance.

Like all new technology, there is a learning curve for those having to use it to make money.  But according to Rust, his operators all find the P5 easy to manage, despite the fact that average speeds have increased by a factor of five. “It has great ergonomics, which makes it a real operator’s press, and it’s very functional and logical, which means that we have been able to slash delivery times,” he added, and indication that the P5’s LED capability was now allowing the company to be more selective with the work it takes on. “We’re also getting requests from ink, varnish, and substrates suppliers to run tests on the P5, and we’re achieving great results with metallics.”

The majority of MRE’s work is currently for the food, chemical, automotive and transport industries of the German, Czech, and Benelux markets, with typical run lengths on the P5 of 1000 – 3000 linear metres. “As run lengths decline and substrate prices continue to rise, the P5s ability to reduce waste with its short web path and get jobs on and off quickly is critical.  Water-wash plates make it an eco-friendly press with a low carbon footprint, which is something our customers love to trade on,” said Rust.

Squeezing out even more productivity

Never a company to stand still, MRE is currently looking at ways to customise its MIS to squeeze even more productivity out of the Mark Andy. Looking ahead, Klaus-Dieter Rust is already in negotiations for a second Mark Andy flexo line and will subsequently look at digital to grow the company’s online business. Asked for a comment to illustrate how the strategic plan is going so far, he said: “We thought LED-UV would give us an edge over our competitors and I’m pleased to report that it has exceeded all our expectations and the promises made by Mark Andy.”

“Traditionally, we have had a policy of funding investment from own resources, but we should like to express our thanks and gratitude to the State of Saxony for their encouragement and assistance with the Mark Andy project,” he concluded. MRE’s varied customer portfolio is seen as a good hedge against seasonal and market fluctuations, and the company is keen to build on its reputation for quality. Long accredited to ISO 9001, it is due to achieve FSC status later this year.