12.02.2020 From relatively humble beginnings in 1945, Drorys Packlist has grown to become one of Italy’s premier label converters, and under the current ownership and management of the Bròcani family is well placed to develop and enhance its reputation for innovation and environmental care in the packaging market. 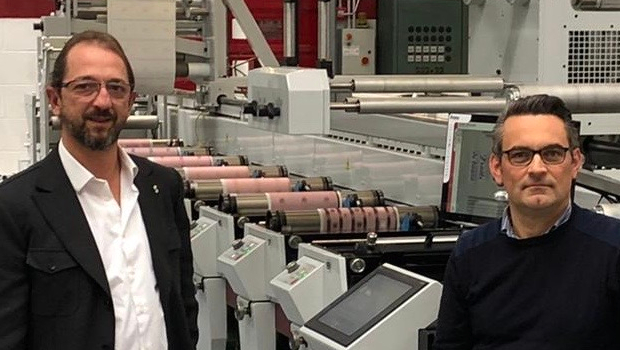 Early days saw Mr Drory’s company buying and selling labels manufactured by Dennison and the company developed a business trading fabric labels with the USA. It also became the exclusive supplier in Italy for the ‘Meto’ label applicator. But it was in the 1970s, with the formation of Packlist that production of self-adhesive labels began in earnest using narrow web rotary letterpress machines and as a European ‘first’ a narrow web roto-gravure line. This expansion attracted the likes of Tic-Tac and Ferrero Rocher for whom the company is still a major supplier, to which in more recent times it has added Heineken by dint of an innovative solution for labelling the company’s beer bottles using a synthetic fabric for a ‘no label’ look.

Catering for the volume market

When Mr Drory died in 2007 the company passed into the ownership of the Weizmann Institute of Science, from which the Bròcani family has since acquired a 100% stake-holding, with father and son, Piergiulio and Gabriele in command. The company, which has its headquarters in Turin and two other manufacturing plants, Drorys Sud, in Palomonte, some 60km from Salerno south of Naples, as well as a special products division named Rifpack, now employs more than 100 people and generates annual sales in excess of €21M, so clearly it caters for the volume market as well as the more creative niches.

It was into this highly productive and successful operation that Mark Andy’s Italian distributor Franchini began to promote the benefits of the Performance Series of flexo presses. Having graduated from rotary letterpress to flexo via the same Swiss manufacturer, Gabriele Bròcani decided that he needed to bring his company’s production capability more up to date and chose a Mark Andy P5 to do this. “Because I’ve had such a long and trusted working relationship with Franchini, I ordered the Mark Andy from the brochure – I didn’t even have a machine demonstration.  And I can honestly say that it has met and exceeded all our production expectations and allowed us to switch work from gravure and offset because of its ability to produce high quality at high speed,” he commented.

Straight after being commissioned the new Mark Andy went onto two-shift production using low migration inks. Seeing the extra productivity of the P5, Bròcani decided to invest in new inspection rewind technology too and having been a long time Rotoflex user installed three new VSI 430 models soon after the press was in commercial production.

Press specification of the ‘film-capable’ 430mm (17”) P5 includes a corona treater and web cleaner prior to eight UV-flexo print stations, web turn bars and a cold foil facility with standard die cutting unit, and it is currently working on runs of typically 20 000 linear metres, with a very low level of waste, thanks to its short web path and the pre-register and auto-register technology fitted. With changes in market demand bringing shorter job runs, Bròcani says his company has had to adopt a new way of thinking and working to accommodate new production methods and workflow. But he is keen not to change the attention to detail and creativity that more than 60 years’ of experience has given the company in the label business. Rightly proud of his portfolio of international ‘blue-chip’ customers, many of which are also partners in product innovation and development, Bròcani is keen to maximise the flexible production capability of the P5.

With EN ISO 9001 as well as FSC and PEFC accreditation, and 14001 environmental certification and BRC Food Compliance in its plants, Drorys Packlist sees its future as combining cutting edge R&D with its inherent environmental ethos. As he works on developing the export side of the business by forging strategic partnerships with market leaders, Gabriel Bròcani knows that ongoing investment in the latest technology is the only route to success in an increasingly competitive marketplace, and the recent installation of the Mark Andy P5 has highlighted this very clearly.