14.07.2021 Perfect products and solutions, but also perfect processes – that is the declared goal of the packaging specialist Karl Knauer KG (Biberach/Baden, Germany). According to the company from the Black Forest, this is the only way to realise its high demands on productivity, efficiency and sustainability. 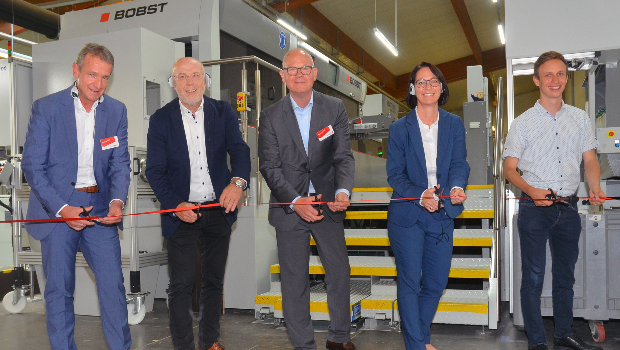 With the commissioning of the new Bobst MASTERCUT 106 PER 3.0 die-cutting machine, the company in Biberach has come even closer to achieving this goal.

"In principle, what applies to die-cutting also applies to our process strategy: we take away everything that is not absolutely necessary for adding value to the products and thus approach a perfect, lean end result," explains Michael Deronja, managing director of Karl Knauer KG. For Karl Knauer's "overall stamping strategy", this means investing in a new generation of machines by 2023, reducing the number of lines from five to four. Once the conversion of the die-cutting department is complete, productivity, i.e. sheet output, will have increased by 20 percent and there will be two state-of-the-art machines each in 3b format and 6 format. "We have already replaced the heart of the die-cutting department with a new Bobst die-cutting machine type EXPERTCUT 145 PER in 2019 in the first expansion phase and now – in phase 2 of the modernisation – we have successfully implemented and commissioned the Bobst MASTERCUT 106 PER 3.0 as the second new machine. Last but not least, the third new die-cutting machine will be implemented by 2023 in the final step of the expansion plan."

What sounds so simple is and was connected with an enormous financial, logistical and personnel effort. This is because the second new system for the punching department weighs only about half of the "EXPERTCUT 145" purchased in 2019, but still a proud 32 tonnes. The installation and assembly of the new system took around five weeks and demanded the utmost concentration from both the Karl Knauer and Bobst teams. After the installation and the successful test phase, the new heavyweight at Karl Knauer can now also score with groundbreaking performance parameters in operation. According to the company and the manufacturer, the MASTERCUT 106 PER 3.0 sets a new benchmark in the packaging industry with a speed of 11 000 sheets per hour, not only in terms of productivity but also in terms of cost-effectiveness. At the same time it offers innovative features that significantly simplify set-up, operation, precision and reliability. In order for Karl Knauer's die-cutting team to be able to use all the features and options, intensive training of the staff was necessary, which took place in parallel with the installation and commissioning.

In addition to familiarising and training the team in the die-cutting department, the future makeready script was also drawn up in collaboration with Bobst. This is necessary in order to be able to achieve an optimised, significantly reduced set-up time with the new system. And this is important because, as is true everywhere, time is money and there is rarely too much of it. At Karl Knauer KG, too, the day could have more hours. Because after the stable production of the MASTERCUT 106 PER 3.0 has started, the dismantling of the predecessor machine that is no longer needed is to begin in July 2021. And then the preparations for the final phase of the rebuild will begin. By 2023, the third new machine will also be in place at the Biberach site and will ensure that, in addition to volume orders, short runs can also be produced at economic conditions in Germany. www.karlknauer.de
Top Companies