15.09.2022 1972 was the year of birth of opti-color Mess-und Regelanlagen GmbH (Bad Salzdetfurth, Germany). It all started with the idea of creating a fully automatic and reliable viscosity control system with real reference to effective process data. 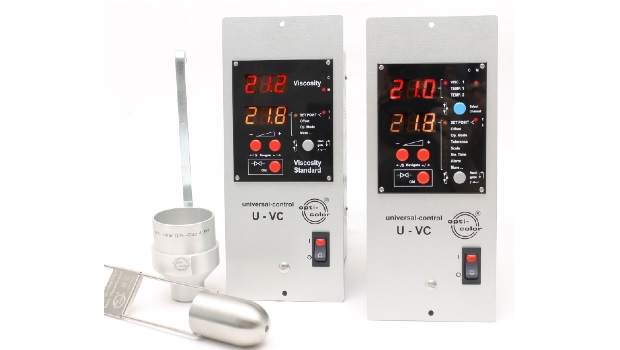 © Photo: opti-color
The UVC Universal Control for viscosity and temperature is the central unit of many opti-color systems.

Company founder Helmut Schultze's goal at the time was applications of inks and lacquers in gravure and flexo printing, where manual measurements and corrections with test cups and thinners were usually the norm: here he identified a need and thus a market for more modern control elements.

Positive echo on the market

A prototype was developed and turned into a zero series, which was used for practical tests, especially in well-known gravure printing companies. The success and the feedback of the users were overwhelming, the opti-color control systems celebrated their breakthrough. Today, opti-color control systems are a standard in many branches, whether for cans and sheet printing, in the automotive industry and its suppliers, or in the chemical and food processing industries.

Initially – in the 70s and 80s – industrial printing companies were the main customers before the other industries were actively served during the 1990s. It was really astonishing to see the number of possible usages for automatic viscosity control, even in unexpected branches like in foundries and tube-manufacturing.

Expansion of the product range

The product range at opti-color was successively expanded with a clear focus on the control and regulation of liquid media. Temperature and level control systems were added; and in order to be able to supply everything from a single source, pumps, agitators and stainless steel tanks were also designed and offered.

Today – after 50 years – around 20 000 viscosity control systems and more than 1000 MCS sets with combined temperature regulation and other functions have been delivered worldwide. Customers on five continents also receive application-related advice with clear expertise in the special properties of liquid media. The upcoming trade fair participations are also international, including ICE, MetPack, Gifa and drupa.

opti-color continues to be a family-run company, today managed by Carsten Schultze. The third generation, Leif Schultze, has already been integrated into the company. They are all looking positively to the future, motivated by new challenges and ideas.