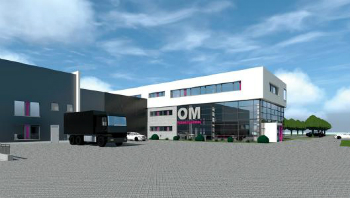 The adhesive technology specialist OM-Klebetechnik GmbH starts the last quarter with good prospects. Only a few kilometres away from the previous company headquarters in Seligenporten, Germany, in the Neumarkt district of Woffenbach, the construction of the new administration and of larger production facilities is just beginning. At the same time, the "3M Preferred Converter" award has earned the company the highest partner status with one of the world's leading manufacturers of adhesive products.

Just recently, at FachPack at NürnbergMesse, it once again became clear how broadly positioned the manufacturer-independent supplier is. The company from the Upper Palatinate presented itself to interested parties from all over Europe at the industry meeting for packaging and logistics. As a "tesa Industry & Converting Partner", OM-Klebetechnik presented the new fingerlift packing tape for safe opening without a knife even before the official market launch. Another highlight was the double-sided 500µm PE foam adhesive tape for use at the point-of-sale, which can be loosened and reused several times. In addition, at the booth, 3M, Orafol, AFTC, Nitto and many other branded raw products were exhibited, which were finished with OM bonding technology through individual converting.

The new building, which is expected to be completed by mid-2019, had become necessary due to the steady growth of recent years. In the future, there will be more space on an area of around 23 000m2 to produce a wide range of products that meet industrial requirements. Another positive side effect is that the processes in the modern machinery can be newly planned and further optimised, for example between the recently acquired flagships for laser cutting and digital label printing.