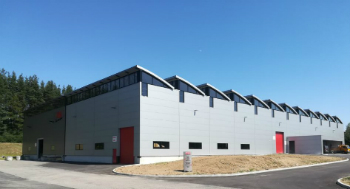 The company headquarters of Mondon have been upgraded since 2017 (photo: Mondon)

The machinery experts at Mondon SAS (Saint-Pal-de-Mons, France) are well-known for their winding and converting lines. While the company started out in 1983 with machinery designed mainly for the plastic market, Mondon has broadened its portfolio to include nonwovens since 2000, and rubber and gum since 2010.

Since 2000, the company managed to increase its annual turnover from €3M to €8M. In order to be better able to fulfil its clients’ demands for ready-to-use machinery, a larger mounting are became necessary. The construction of the new workshop began in June 2017 and was finished in May 2018. Before the extension, Mondon had 600m2 in offices and 3000m2 of workshop area. Now, 2100 further square-metres are available. The investment was subsidised with €100 000 from the Auvergne region and €10 000 from the Communauté de communes Les Marches du Velay.

With the increased working space, Mondon expects to be better able to serve its clients, which are 50% from France and 50% from abroad. The company relies on an international sales team with agents located in Russia, Turkey, Costa Rica and others. Finally, the French winding experts are looking forward to their presence at the ICE Europe tradeshow in Munich – one of many international events the company regularly participates in.