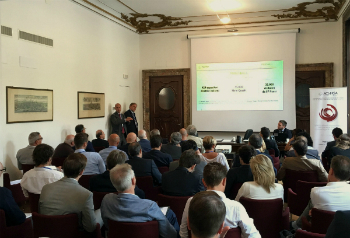 At its annual meeting, ACIMGA (the Italian manufacturers association of machinery for the graphic, converting and paper industry) announced encouraging figures on the market and at the Milan-based exhibition Print4All.

“Today more than ever, companies need to be able to speak with one voice and interpret the needs of the industrial world, starting from their members’ needs,” said president Aldo Peretti (who is also part of the general council of Confindustria as the elected member of the largest companies in the Triveneto area). He also emphasised the success of Print4All, the exhibition held last May, whose upshot exceeded all expectations: a large international public and over 30 000 visitors.

The success of the exhibition, which, in partnership with Fiera Milano and ARGI is already looking forward to the next edition in 2021 – the year after the German show Drupa, with which strategic agreements of mutual promotion are already in place – was presented along with the association’s programme at the annual meeting held at the offices of Assografici, where ACIMGA is set to move its headquarters to in early September: “We are moving back to the historical part of Milan. Our natural place is here, with Assografici and Assocarta, in the federation we are part of,” explained president Peretti.

The association has grown by one-third in little over one year. Today it numbers 65 members and is set to reach 100; an internationalisation project through logistic platforms is about to be implemented; market intelligence services have been strengthened with three-year projections – a unique case in Italy’s association landscape.

Yet another project of great strategic relevance is the partnership with the Paper and Graphic Federation, with which, as pointed out by Peretti, ACIMGA is working on ground-breaking double membership agreements involving the Assografici specialisation groups. This will take industry integration even further to “be closer to the market, without forgetting our place as part of the association of machinery manufacturers Federmacchine, where we hold the vice-presidency,” adds Peretti.

The state of the industry was also discussed during the meeting: In 2017 total revenues went up by 8.7%, the number of employees by 1.4%, the domestic market shot up by 28.3% aided by the government’s Industry 4.0 plan, exports maintained the already excellent levels of past years.