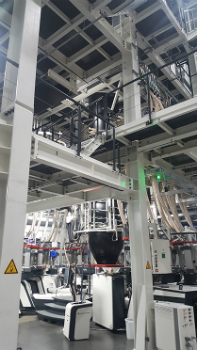 Infiana has further invested into its extrusion competence (photo: Infiana)

As part of an investment package worth millions of euros, the Infiana Group from Forchheim, Germany, has further strengthened its machine bank. In future, the multi-award-winning specialty film manufacturer will manufacture its products in an ultra-modern 9-layer extruder with integrated inline stretching. This makes Infiana even more flexible in terms of the film thicknesses and widths that can be produced. Dr Herbert Bader, VP Innovation Infiana: “Especially in the field of barriers in combination with mechanical properties, we are currently doing a lot of development and research work. This combination is of central functional importance for many of our growth markets. With the new technology, we are for the first time in a position to quickly and consistently convert the development work carried out to date into market-ready, future-oriented, innovative products with unique properties.”

It took 17 months from planning to production of the first film with the new extruder. During this period, Infiana not only built a completely new production hall for the extruder, but also created a new production infrastructure. “With the expansion of our machine bank we are reacting to the increased capacity requirements and will be able to produce more complex products efficiently in the future,” says Stefan Herfurth, COO Infiana.

In addition to the possibility of 9-layer extrusion, the special film manufacturer has now also acquired the expertise to stretch films within the machine and in a single operation. Infiana is already prepared for the future challenges of the industry and wants to be able to offer solutions for future customer requirements.

The 9-layer extruder is only one of many investments in recent months. In addition to extrusion, the specialty film manufacturer has also invested in printing and coating technology. Moreover, Infiana also expanded its machine bank with a fully automated winder, which enables narrower cutting widths through the use of a robot.