13.01.2022 IMS TECHNOLOGIES (Calcinate, Italy), a leading company in the engineering and manufacturing of high-tech customised machinery operating in the converting market through its world-renowned brands GOEBEL IMS, LAEM IMS and ROTOMAC, and its parent company Coeclerici, is among the protagonists of the 44th edition of the famous Dakar Rally – formerly Paris-Dakar, which is currently being held in Saudi Arabia. 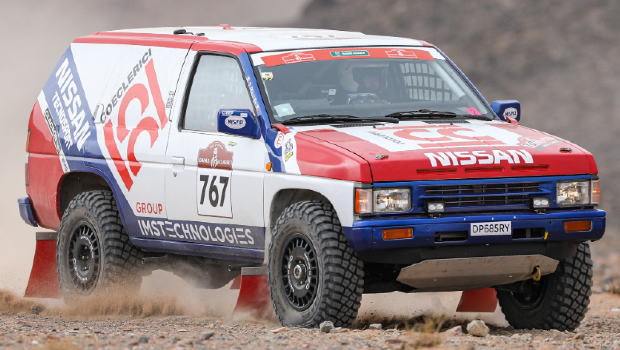 Specifically, IMS TECHNOLOGIES and the Coeclerici Group are sponsoring one of the four crews of the Tecnosport team participating at Dakar 2022, represented by Giacomo Clerici, managing director of Coeclerici Far East, and the co-driver Oscar Polli. They are competing at the wheel of a 1997 Nissan Terrano in the Classic category, reserved for vehicles produced before 2000.

The race, which started on 1 January from Ha'il, will end, after 12 stages, on 14 January in Jeddah and will cover a distance of over 8000 kilometres, 4300 of which are special challenges. The route immediately proved to be very challenging both due to the sand dunes, which represent a major technical difficulty, and due to its duration and, finally, due to the bad weather that accompanied the first days of competition.

In addition to cars, motorcycles, trucks, quads, side-by-sides, and light prototypes take part in the rally. From 2021 also "historic" cars, i.e. those that are at least twenty years old, compete in the Classic category, which this year has seen a significant increase compared to last year, rising from 30 to 148 vehicles. There are over one thousand competitors registered for Dakar 2022, including drivers and co-drivers, for a total of around 500 vehicles and 63 nations represented.

The passion for challenges, resilience and technological excellence bind IMS TECHNOLOGIES and Coeclerici Group to this epic competition, the company stated in a press release. All their support goes out to their brave team.