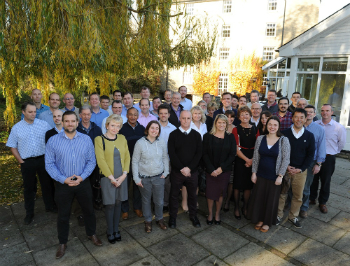 Global Inkjet Systems (GIS) Ltd, a leading developer of software, electronics, and ink supply components for industrial inkjet systems based in Cambridge, UK, is celebrating its 10th anniversary. By supporting OEMs and integrators with its innovative product portfolio,GIS has grown exponentially, starting with four members of staff in 2006, growing to 25 in 2013 - at which point the company was awarded the Queen’s Award for Enterprise (International Trade) - and today totaling 50 employees. GIS is now a global leader in industrial inkjet with its products and technology driving thousands of industrial inkjet printheads worldwide.

During November, GIS has organised a number of events to mark the milestone anniversary, including an evening reception for inkjet industry colleagues, which took place during the recent InPrint show in Milan – and also a special anniversary lunch for its employees in Cambridge. At the staff lunch, Professor Andy Hopper, serial entrepreneur and Head of the University of Cambridge Computer Laboratory and Honorary Fellow of Trinity Hall and Corpus Christi College, Cambridge, attended as guest speaker. In his speech, Professor Hopper likened the GIS journey to that of many other successful Cambridge cluster companies whose reach has extended globally, adding “GIS is an integral part of the power of Cambridge”.

Nick Geddes, GIS CEO, and Jim Brotton, Director, co-founded GIS in November 2006. “We realised there was a gap in the market,” said Geddes. “Nobody seemed to have a flexible electronics platform that provided the core components needed by industrial inkjet system builders – and Jim and I felt that we could provide the solution to this opportunity.  Now 10 years later, our product portfolio has expanded to offer much more.”