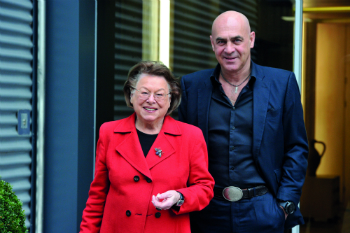 Proud of the 100 years of Erhardt+Leimer: Hannelore Leimer, chairperson of the board since 1977, and Dr Michael Proeller, CEO (photo: Erhardt+Leimer)

Erhardt+Leimer GmbH (Stadtbergen, Germany) is celebrating its 100th anniversary this year. Founded as a workshop in Augsburg in 1919, over the years the company has grown into an international high-tech industrial business with more than 1600 employees and now very successfully occupies a special niche in automation technology worldwide: the guiding and inspection of all materials that are produced and processed in the form of moving webs.

In 1919 Manfred Erhardt founded a workshop that was initially dedicated to the sale and servicing of industrial clocks and signal systems. Albert Leimer joined the company six years later. In 1935 E+L started to develop and manufacture the first precision mechanical units for the local textile industry. In parallel with the upturn in the textile businesses, the company grew and specialised in web guiding units for the automatic guiding of the web in textile machines. Then in 1960, Erhardt+Leimer expanded its area of activity to the printing and film/foil industries; later the packaging, non-woven fabric and tire industries were added. The paper industry was entered at the start of the nineties. As early as 1995 the company pioneered digital technology and introduced camera technology into its automation systems as standard; in 2000 it became involved in inspection technology. Today the Erhardt+Leimer group is a global business with subsidiaries, branch offices and over 300 service stations all over the world and a broad portfolio in the area of automation, measuring and inspection technology for the production and processing of materials in web form. The innovative power of the company is apparent in the number of patents it holds: by 2019 it held 782 national or international patent applications, patents and utility models.

The primary sales market is Asia with over 60% of sales; another important market is the USA. E+L has established itself in all important industrial countries with wholly owned subsidiaries, 19 up to now. There are also production facilities in India, China and the USA. The first foreign subsidiary was founded 45 years ago in Brazil, a very risky venture in those days. The early global expansion strategy paid off: "With hindsight the founding of these companies in Europe, America and Asia was an important milestone in the development of the business," explains company boss Hannelore Leimer. "At that time we created the basis for our current global network. Without this international market presence, the success story of E+L would not have been possible to the same degree."

At the top of the family-run business along with Hannelore Leimer, daughter of company co-founder Albert Leimer and Chairperson of the Board since 1977, is her nephew Dr Michael Proeller acting as CEO. Today she largely leaves the operative business to the members of the board, however her vast entrepreneurial experience continues to be in demand: "In a family business the transition from one generation to the next is a difficult phase," says Hannelore Leimer. "I see it as my responsibility to be involved constructively in this transition in our business with an orientation toward the future."

After the company had primarily developed devices for the textile industry during the initial decades of its existence, from 1960 E+L also gained a foothold in the graphics industry. In this industry it was not possible to use the web guiders for textile webs, E+L therefore developed a new product for the correction of the lateral web position, the pivoting frame. Although today's web guiders use the latest technology, the principle of operation of this highly compact system is the same as it was then. Annually, the company sells around 25,000 web guiding systems.

From 1980, Erhardt+Leimer developed the first CCD line scan cameras that were used as edge sensors for web guiding. At drupa, the world's largest trade fair for the printing industry, the company presented the world's first completely digital web guiding system in 1995. At the start of 2000, the line scan camera OL 50 for surface inspection followed. Three years later the web monitoring system ELSCAN was added, and in 2005 print image inspection rounded off the portfolio for the area of quality assurance.

A key topic for the future is the digitalisation of production for Industry 4.0; E+L is well equipped for this change. "All current E+L components are 'I 4.0-ready,' i.e. suitable for integration into the latest generation of production systems," explains CEO Dr Michael Proeller. "Each of the E+L components manufactured in large numbers, whether it is a sensor or high-precision linear drive, can be connected actively and passively to networks. E+L technology therefore integrates perfectly into the production and/or ERP systems of our customers to make networked and therefore documented and automated manufacture possible."

"A business must shed its skin every ten years at the latest, that is it must critically scrutinise its existing situation and initiate necessary changes to stay on the ball with its technology and maintain its position on the market," says company boss Hannelore Leimer. "I am proud that, despite the many economic and political challenges, we have been able to steer the business safely and stably through the past 100 years and always be aligned with the latest technology and market changes."