26.02.2020 A new report by Statista states that there will be a gap of two million skilled workers in Germany in the next ten years. The market is already tense: While millions of well-educated people will retire, from 2022 there will not be enough university graduates to fill positions. 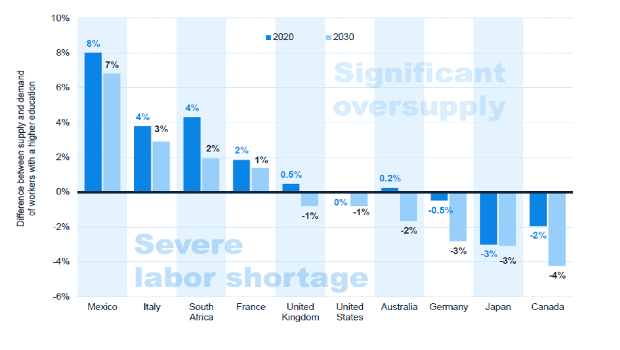 © Photo: Statista
The difference between supply and demand of workers with a higher education.

An estimated six million university graduates will retire by 2030. At the same time, innovation and digitisation will increase the demand for qualified workers. Although more than a third of the younger generation is graduating from university (compared to a quarter of their parents' generation), structural change continues to pose major problems for the labour market.

Low-skilled workers are being driven out

In addition, rapid automation could put almost a third of all low-skilled workers out of a job by 2030. Even though the proportion of the population born abroad has almost doubled in the last 17 years (from eight to 15 percent), migration will be an important way to close this gap.

Oversupply in other countries

Germany, together with the UK and Canada, is experiencing an increasingly pressing shortage of skilled workers. At the same time, Mexico and Italy, among others, are already facing an oversupply of well-trained workers. Since the 1990s, many countries have been steadily adapting their migration policies to these imminent shortages, but so far with insufficient success. An increased migration rate for urgently needed skilled workers will be a key solution to compensate for the lack of domestic labour. The Skilled Worker Immigration Act, which will come into force throughout Germany on 1 March 2020, could ease the impending shortages on the German labour market.