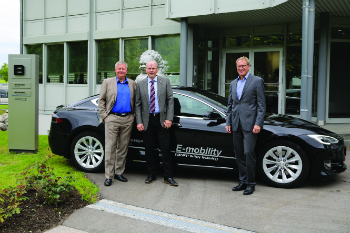 Brückner drives Tesla: Since this summer, the model S 100 D is part of its fleet. The managing directors (from left: Stefan Neumann, Helmut Huber, Michael Baumeister) are convinced of the technology (photo: Brückner)

Lithium-Ion batteries are important building blocks for the growing e-mobility sector, especially for e-bikes, e-cars, e-scooters or as energy storage devices, for instance in portable electronics such as notebooks or smartphones. Within the batteries, in turn, the separator foils are decisive when it comes to functionality, capacity, charging times and lifetime. For Brückner Maschinenbau GmbH & Co. KG (Siegsdorf, Germany), this technical foil type is a relatively “young” and interesting business field in a very dynamic future market.

For the production of high-quality battery separator foils (BSF), the company offers the entire bandwidth of different process technologies for high production efficiency and constantly high foil quality: The patented EVAPORE process as well as lines and components for the so-called wet process. Several lines for the production of BSF have been sold in the last few years, some of them are already successfully running and receive an increasingly positive feedback in the market.

Helmut Huber, managing director sales & project management, explains: “After large development investments in the past ten years and due to our very positive references at leading film producers, the demand for our lines in the separator foil field is increasing significantly. In this year, we were able to sell ten lines until the end of September with an overall value of €130M to insider producers in different Asian countries. And we are receiving visible signals from battery and film producers that the willingness to invest will remain strong. A multitude of recently announced, exclusively electric car types in the European automotive industry will certainly lead to production sites for batteries and according separator foils in Europe as well. Here, we see great chances for Brückner to be there from the start, especially with the in-house developed, environmentally-friendlier technologies.”

Recently, Brückner Maschinenbau invited numerous representatives from the e-vehicle and battery scene to Siegsdorf. At the “Battery-Separator-Demo-Days”, visitors from all over the world were shown the latest developments in battery separator foil production in Brückner’s technology centre.
Top Companies