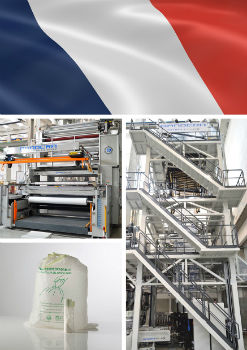 A French converter invested into the eco-friendly technology from Bandera (photo: Bandera)

In 2016, a new law entered into force in France, prohibiting the sale and distribution of non-biodegradable PE-based disposable bags with thicknesses lower than 50 microns. Consequently, a French converter decided to invest in a new project, which includes the purchase of a SmartFlex Bio line from Costruzioni Meccaniche Luigi Bandera SpA (Busto Arsizio, Italy) for the production of biodegradable and compostable bags mainly made of polymers that originate from plants.

Besides biodegradable film, this line can also produce thermo-shrink, lamination & converting and general packaging film. The equipment, which will be installed in the French region of Rhône-Alpes, can get a net film layflat up to 2200mm (already trimmed), a thickness range from 15 to 200μm and an output up to 400kg/h with a Ø 300mm die.

Bandera boasts a range of collaborations with suppliers of biodegradable and compostable materials. Especially in Western Europe, the company has already sold equipment for the processing of bioplastic-based materials such as corn starch and PLA (polylactic acid).