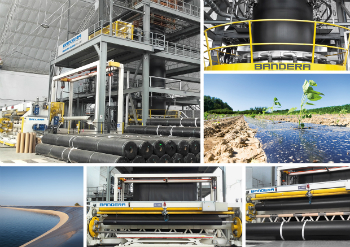 Bandera has strengthened its cooperation with the South American producer over the years (photo: Bandera)

Costruzioni Meccaniche Luigi Bandera SpA from Busto Arsizio, Italy, has several loyal customers, among them a primary South American producer, who has built, through the years, a strong relationship with Bandera and keeps investing in new machineries for the production of agrifilm and geomembrane. This strong collaboration started in 2007 at the K show in Düsseldorf, the international trade fair for the plastic and rubber industries. This first meeting introduced the investor to the defining qualities of Bandera, and to its long and solid experience in the extrusion field. These key aspects persuaded him to rely on Bandera for the supply of an extrusion die head, 1800mm in diameter, for the production of agrifilm and geomembrane. He then decided to purchase the extruders and replace a few parts, in order to improve his production efficiency. Since then, one order followed another. The machines’ quality, the reliability of the brand, the know-how and the expertise of the service department convinced the investor to renew his trust in Bandera again and again.

Since 2010, the South American producer has opened three new plants in Central and South America, which meant new extrusion lines and new purchase orders for Bandera which, from 2007 to the present, received around 20 orders from the investor for its innovative technologies.

The relationship between the South American producer and Bandera has strengthened through the years. It is not a business-only bond but it is based on mutual trust and a strong spirit of cooperation.