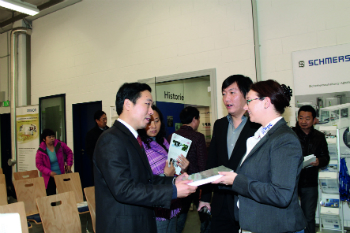 The PEC is contacted by international delegations and establishes connections with other networks from all over the world (photo: PEC)

The Packaging Excellence Center (PEC) celebrates its 10th anniversary in 2017. Since its foundation, PEC has developed from a regional into a nationwide network in Germany with international reputation. From originally 36 founding members, the industry network has grown to 70 members and partners today. The member companies are jointly tackling important topics of packaging technology and emphasise the importance of the regional economy in the Stuttgart area also on the international stage thanks to constant exchange.

The PEC is a textbook example for an organically grown company cluster in the Stuttgart region, where a unique concentration of companies from packaging and automation technology in all sizes is present. In order to bundle the strengths of this future-oriented business and fully seize its potentials, on 26 October 2007, the Packaging Excellence Center was created as a cooperative platform. Among the 36 founding members were companies such as Harro Höfliger and Bosch Packaging Technology as well as universities and institutes around Stuttgart.

In the last ten years, PEC was able to sustainably connect companies from packaging technology within the region. As a cooperative platform under recognised direction, PEC brings together economy, science and politics and thus strengthens the packaging sector in the region. In the process, the cluster bundled innovative local forces, created synergies and enabled access to research results, so that their practical usage could be leveraged entirely. PEC’s managing director Hans Christian Zeiner and Tamara Stange as assistant of the management, look back at fruitful networking tasks, which offered a significant surplus value for the packaging business and therefore for users all over the world.