10.02.2021 One of the UK’s longest serving manufacturers of security and label stock coated products, Tullis Russell, has chosen to install Vetaphone corona treatment technology on its state-of-the-art production line in Bollington, Lancashire. 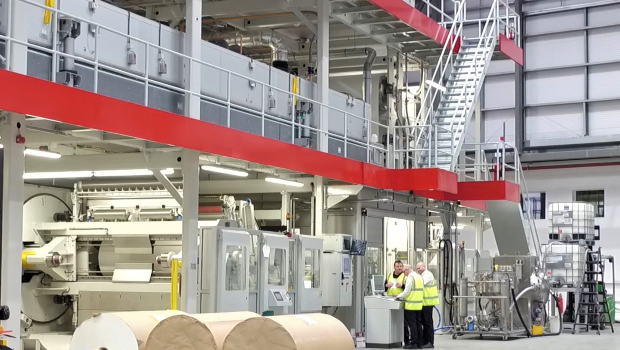 The commissioning has allowed the company to expand its portfolio of coatings on paper and film for complex specialist applications.

But to appreciate the importance of this project, one needs to look back at the company’s unique history and current structure of ownership. It started life in Manchester in 1865 under the ownership of Leigh Slater, whose brother Henry soon joined from running cotton mills in Italy. Lancashire was the UK hub of the cotton industry at that time, and by 1899 the company was manufacturing chromo white and tinted enamels, tin foil and gold foil.

Fast forward to 1949, when an 84” (2.13m) wide air knife coater was installed to give the company six coating lines all running at around 60m/min. The Tullis Russell connection was made in 1989 when the Scottish paper maker acquired Henry & Leigh Slaters’ business and merged its other existing paper making plant in Stoke-on-Trent into the Bollington site.

Tullis Russell has an unusual background too. Managed by brothers David and Patrick Russell during the Second World War, David was so affected by his brother’s death in action that the Russell family took the decision post-war to share ownership with the community and established the Russell Trust. Today, the Trust holds a 28% equity share in the business and the remainder is in the hands of the 105 company employees.

By 2016, the company had become closely involved with KROENERT, a leading German manufacturer of coating machine technology, with a plan to integrate advanced coating capabilities at the Bollington site. A key element of the project was to ensure that any proposed solution gave Tullis Russell the flexibility to remain agile in the range of markets in which it operates.

The result was a KROENERT coating line that is one of a kind in many ways. It is designed and built to handle thin films as well as high caliper board and apply thin aqueous coatings as well as thick and highly viscous coatings. The system design is characterised by duplex coating that allows Tullis Russel to coat one layer on the front and one layer on the back, or two layers on the same side giving maximum flexibility. In addition, the coating head’s trolley design allows quick changes between five different coating technologies, which highlights the two-layer curtain coating capability.

“After an intensive test with the Tullis Russel team in our Technology Centre we were able to define the best setup for the coating equipment to ensure the success of the project. Because the quality of the components was such a key issue, Vetaphone was the obvious partner to choose for surface treatment,” said Markus Waterkamp, managing director of KROENERT. One of the fundamental requirements was the ability to surface treat substrates accurately and consistently, and the decision to integrate Vetaphone technology was made following in-depth technical discussions and appraisals with the Danish manufacturer.

Speaking for Tullis Russell, sales & marketing director Mitch Lambert commented: “Vetaphone is acknowledged as the pioneer of surface treatment technology, and a third-party recommendation was instrumental in confirming our decision. Traditionally, we have worked with coated papers, but having the Vetaphone Corona unit has allowed us to expand our portfolio into developing coatings on films for specialist, complex applications. The ability to treat our own substrates now gives us the flexibility to produce constructions that would otherwise have been a specification challenge to our supply chain team.”

The Vetaphone equipment installed at the Bollington plant is a VE-1E-B treater unit with an iCorona 4 generator capable of supplying 24kW of power to the 9 finned electrodes. What the company specifically appreciates about the Vetaphone unit is its functionality. The automatic watt density based on web speed allow the production team to maintain consistent treatment levels whilst being operationally efficient and speeding up the product development process. Other features such as the pneumatic engagement make it much easier for the operators to web through the device and set engagement at a speed of their choice.

Today, Tullis Russell produces a range of coated papers and typically PP and PET films for a variety of markets, some of which have security features built in. The 18 500m2 multi-level manufacturing plant in Bollington now has the capability of coating to very fine tolerances, manufacturing multi-layer laminations, and converting and delivering the end products in sheets or reels. Production at the plant stands at around 30 million linear metres a year. “That’s about three quarters of the way around the world,” quipped Lambert.

“Working in partnership with our customers we develop innovative functional coating solutions for a variety of paper, board, and filmic applications by combining state-of-the-art coating capabilities with inhouse technical expertise and an extensive network of suppliers,” he added.

Summing up, VP technical sales at Vetaphone, Kevin McKell commented: “To be acknowledged as a leading supplier of surface technology by a top notch OEM is great testimony to the quality of our expertise and product range – and to work in partnership with such a well-established and respected supplier as Tullis Russell is a double bonus for Vetaphone and its people.”
www.vetaphone.com