12.09.2019 Asia Poly Films Industries, a versatile producer of BOPP films for packaging, has substantially reduced downtime and increased throughput on a lamination-grade film line by switching from a relatively new competing supplier’s die to a brand-new EDI Autoflex die from Nordson Corporation. 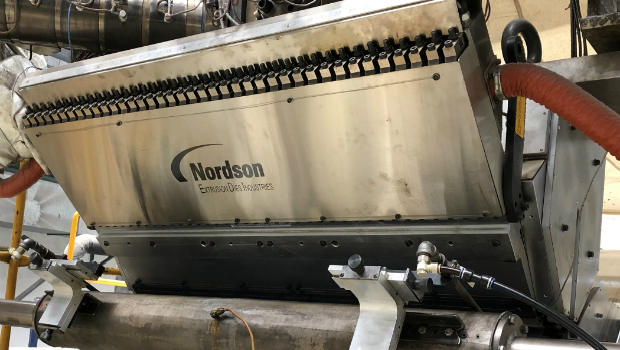 Since it began producing BOPP film in 2017, Asia Poly Films frequently encountered gauge bands and film sagging with the previous die, making it impossible to achieve the degree of flatness required by customers. It was necessary to clean the die every two or three months—a process that meant 48 to 60 hours of production downtime for each cleaning. The die also exhibited gauge variation that could be held within acceptable limits only if the line speed were limited to no more than 2800kg/hr.

Since installing the EDI die in February 2019, Asia Poly Films has been running the film line continuously at 3500kg/hr with gauge variation maintained “well within acceptable levels,” according to Dipesh Patel, director. “In addition, while our old die needed about two hours after line start up to stabilise and start producing film with an acceptable level of gauge variation, the new EDI die stabilises within only 15 or 20 minutes.”

Using the new EDI die with the same extruder, controls, and polymer recipe as in the past, Asia Poly Films has produced film with lower haze and better gloss, Patel said.

The EDI die is an Autoflex VI-R triple-manifold unit. Like the die previously used by Asia Poly Films, the Autoflex die is an automatic one, using data from a computerised downstream gauging system to adjust the transverse thickness profile by making changes to the flexible upper lip of the die.

“The Autoflex system responds more rapidly to gauge variations than other automatic dies,” said Mrunal Sanghvi, general sales manager in India for Nordson’s Polymer Processing Systems business. “In addition, Nordson custom-designed the flow channel, or manifold, inside the die to optimise the flow of the specific polymers used by Asia Poly Films. These are two reasons why the EDI die has enabled Asia Poly Films to achieve saleable product in a shorter time after start-up, hold to tighter tolerances during the production run, and increase throughput while maintaining product uniformity and quality.”