13.07.2020 The self-adhesive specialist HERMA is now saving around 10 000 tonnes of the climate-relevant gas CO2 every year: In the course of commissioning its two new factories for labelling machines (early 2019) and adhesive materials (mid-2020) in Filderstadt, Germany, the company has switched completely to green electricity. 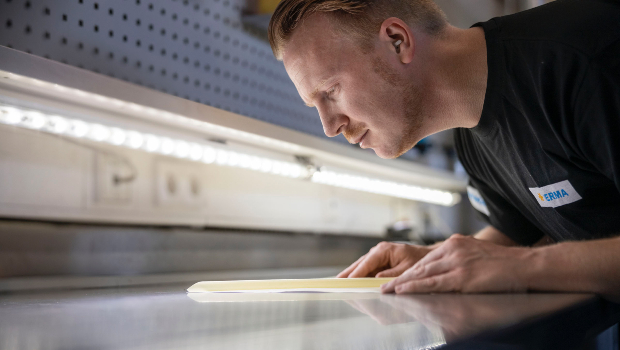 © Photo: HERMA
At HERMA, eco-friendly solutions are an important part of the company strategy.

As an electricity supplier, E.ON Energie Deutschland has been feeding into the public grid since the beginning of 2019 – as evidenced by a corresponding certificate – corresponding quantities of electricity from renewable energy sources in the amount of the actual electricity consumption at HERMA. The amount of savings is based on the German electricity mix, 46 percent of which in 2019 already came from renewable energy sources. "With the construction of the two new plants, we have done a great deal to reduce specific energy consumption. With intelligent solutions, some of which are being used for the first time in our industry, we have been able to achieve a great deal in this respect," says managing director Dr Thomas Baumgärtner. "But of course we still need considerable amounts of energy for our production. By switching to green electricity, we were able to ensure that our electricity requirements are generated in a climate-friendly manner. Stopping climate change or at least slowing it down is one of the world's most important challenges. That's why we are constantly looking for ways to reduce our carbon footprint."

Comparable to a climate-neutral vehicle fleet

HERMA is always breaking new ground in this respect. For example, in 2010 the company was one of the first in the industry to participate in the Cycle4Green (C4G) initiative. For the first time, label backing paper, which was previously considered non-recyclable due to its silicone, is now being sent for special recycling. The valuable paper fibres are used again to produce backing paper and label materials. "The material we have collected at HERMA in 2019 alone contributes to a further 373 tonnes of CO2 being saved compared with equivalent products made from fresh paper fibres," reports Dr Baumgärtner. "But the large quantities are of course generated where the label rolls are used – for example, by brand manufacturers and packaging service providers. Nevertheless, the amount of CO2 emissions that are saved due to our material residues still roughly corresponds to the corresponding emissions of the entire HERMA vehicle fleet. In this sense, we are driving in a climate-neutral manner." In addition to C4G, there are now other initiatives that are also successfully pursuing a similar approach. "Label producers and label users can thus choose the system that suits them best. But the important thing is that as many people as possible participate.”

Since 2017, a further component of CO2 reduction has been the processing of so-called intermediate bulk containers (IBC). These standardised containers are used for the transport and storage of liquid and free-flowing materials. They each consist of a plastic inner container, a mesh basket and a pallet. In 2019 HERMA had a total of 1277 such IBCs reconditioned in an environmentally friendly manner. This saved 136.6 tonnes of CO2 emissions compared with the use of newly produced IBCs. This means that a car that consumes an average of seven litres of petrol per 100 kilometres could drive around 830 000 kilometres in a climate-neutral manner. In addition, 49.2 tonnes of steel and 19.4 tonnes of plastic could be recovered in this way. "These examples show that even small changes lead to amazing CO2 savings," says Dr Baumgärtner. "But we are aware that much more far-reaching steps are needed. We will continue to work on this in the future." www.herma.de
Top Companies