13.12.2019 Baumer hhs aims to be a partner to its customers for hot melt application, continually supplying them with pioneering innovations. One example is the company’s patented Plug & Glue system. 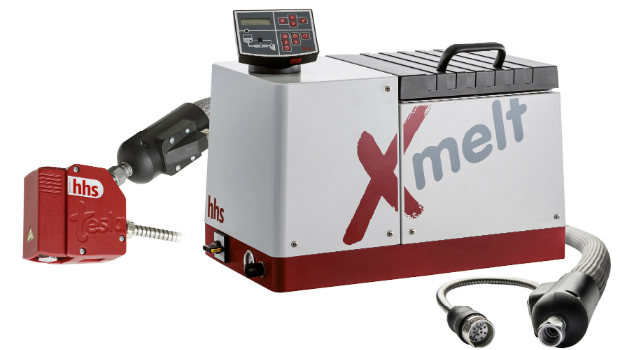 © Photo: Baumer hhs
The patent on the Plug & Glue system from Baumer hhs has been upheld.

“In 2006, our engineers developed an idea for hot melt units that can configure themselves automatically. They implemented it by equipping the individual hot melt hoses and the glue application heads with data carriers. Using the stored data, the controller in the hot melt unit automatically detects newly connected hoses or glue application heads following replacement, and adjusts the control parameters accordingly. Besides ensuring optimum functioning of the control system, the stored operating data also supports preventive maintenance,” says Thomas Walther, head of business development, explaining the key advantages of the system developed and patented by his company.

The data carriers on the individual components store all the information needed for perfect hardware/software interaction in the hot melt application systems. For example, the units are brought up to temperature as quickly as possible, but prevented from overshooting it. The adhesive is neither burned nor exposed to thermal degradation. This additionally protects the materials from which the individual components of the hot melt system are fabricated. Another factor is the very high energy efficiency of the technology. Hot melt systems from Baumer hhs have been proven to consume up to 50% less energy than other systems on the market. And because maintenance-related operating data is stored on the data carriers and not in the controllers of the hot melt units, the data moves from unit to unit when components are reconfigured and is available at all times for preventive maintenance. This information helps to significantly reduce unplanned downtime and increase the productivity of a hot melt application system.

Baumer hhs was granted patent protection for this innovative solution under patent EP 20 547 85 B1 in Europe, CN 101506751B in China, JP5436210B2 in Japan and US9840643B2 in the US. Nordson Corporation later filed a notice of opposition on the EP patent with the European Patent Office. However, the Opposition Division of the European Patent Office in its first-instance decision confirmed the patentability of the innovation, in response to which Nordson filed an appeal. Finally, on 2 November 2019, after the conclusion of two second-instance proceedings, a decision in favour of Baumer hhs was issued, upholding the validity of a modified version of the European Patent. Baumer hhs thus passed an important milestone in defending its patented Plug & Glue system. In addition to these proceedings, a patent infringement suit filed with Düsseldorf District Court against Nordson for the use of this patented solution is still pending.