Lenze
Optimise a drive in 60 seconds

22.09.2021 Machines function optimally when the drives are perfectly adapted to the power train. This ensures that a high-quality product is produced at the highest machine cycle rate with a minimum production error rate. To achieve this, the control loop in the inverter is set to be machine-specific. 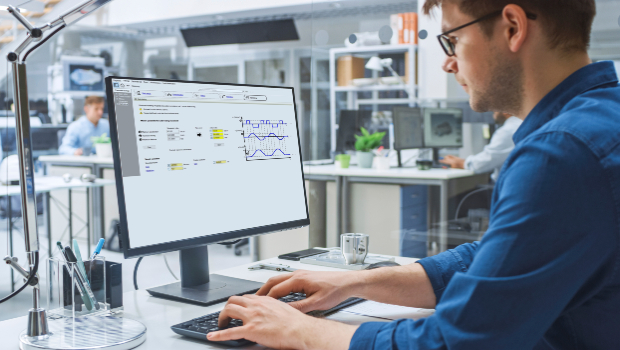 Until now, a drive expert would need several hours to complete this task during the commissioning phase. The time required for this manual setting would depend on the complexity of the motor control loop. But now, this adjustment can be done faster – and better.

High-precision tuning of the control loop in the drive is a basic requirement in many machine applications – e.g., assembly robots, storage and retrieval machines (SRM), packaging machines. This is the only way to achieve competitive machine performance. To achieve this exact tuning, the drive specialist has to invest a lot of time during commissioning.  By using the Lenze auto-tuning function, commissioning times have been significantly reduced for Lenze customers in a wide variety of applications.

The physical models commonly used to represent the motor control loop for a machine are only of limited use in practical applications for optimum control loop setting of the drive axis. The reason for this is deviations in the behaviour between the physical model of a machine and the real machine. The optimisation of the control setting is currently carried out in several tests on the real machine by a drive specialist.

The Ziegler/Nichols oscillation method from 1943 is often used for control loop optimisation.  This method is easy to apply, not model-based, and produces a robust control result.

Lenze has now automated the measurement of the motor control loop and the setting of the control loop parameters for the Lenze i-series servo inverters and significantly simplified the process. The method is integrated in Lenze auto-tuning. No additional measuring components are required apart from the servo inverter, as the drive itself becomes the sensor during auto-tuning with the actual values of the position encoder and the motor current. After completion of auto-tuning, the settings of the control loop parameters are calculated and stored in the configuration of the drive. The existing physical motor control loop is automatically measured quickly, and an exact adaptation to the real machine is performed. Errors that previously occurred due to model deviations, or during manual adjustment, are avoided. This procedure saves commissioning time, is robust, and delivers reproducible results and optimal performance for the machine. Even with complex control loop challenges, such as "gear backlash" or "variable loads," the auto-tuning function works reliably and safely.

The Lenze auto-tuning function can be executed with the Lenze tools EASY Starter and PLC Designer. Attention was paid to the simplest operation and feedback so that commissioning engineers, without expert knowledge, can also execute these functions.

The feedback from Lenze customers, who have already used this process in their machines, has been consistently positive. In particular, the simple, robust principle and the enormous speed of optimisation were cited as enormous advantages over the previous manual procedure. The fact that not only the cycle times, but also the output of the machine, could be improved also provided a high level of satisfaction.