Plasmatreat
Presentation of the extended management

16.11.2022 Plasmatreat GmbH (Steinhagen, Germany) is expanding its management to pave the way for a successful future as a family business. The world market leader for atmospheric plasma systems and systems for surface pre-treatment of various materials presented the expanded management team for the first time at its press conference at K 2022. 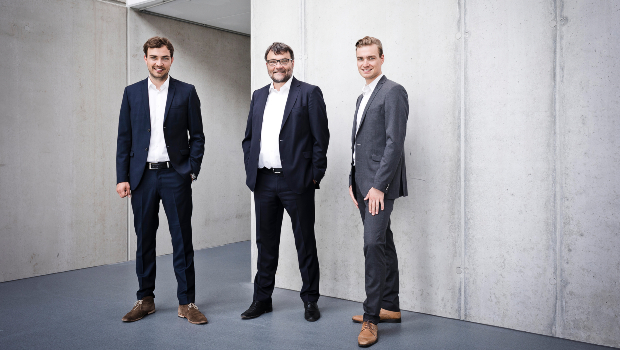 Plasmatreat was founded in 1995 by Christian Buske, who was solely responsible for building up the company. Thanks to the great success of the innovative, versatile plasma technology, the company now has technology centres at its headquarters in Germany as well as in the USA, Canada, China and Japan and is represented in more than 30 countries with its own subsidiaries and sales partners and is present close to its customers around the globe. In order to continue and expand this success, founder Christian Buske is counting on an orderly transition of the family business to his sons. To this end, he is already expanding the management of Plasmatreat GmbH and introducing the second generation.

Magnus Buske, who studied business administration and mechanical engineering, brings with him extensive experience in the adhesives industry from his work at Jowat SE (Detmold, Germany) and is, among other things, very knowledgeable in the area of pre-treatment of substrates. This background qualified him for his position as manager bonding applications at Plasmatreat in 2018, where he was responsible for projects in various industries and research areas. Shortly after joining the company, he took on additional responsibility for the Research and Development division. In the extended management of Plasmatreat, he is now also responsible for the areas of purchasing, production, design, innovation management and the commercial departments. "In the near future, I see the focus of our company and my work particularly in making production processes more environmentally friendly and replacing harmful solvents with our plasma applications, as well as in reducing CO2 emissions," says Magnus Buske.

Lukas Buske started his professional career at the VW Group after completing his Master's degree in industrial engineering and worked in the field of research on mobile services. He then gained almost three years of experience as a development engineer at Audi AG in the area of sensors and actuators. From 2017 onwards, he managed the PlasmaPlus business field at Plasmatreat, which produces nanocoatings using atmospheric pressure, e.g. for anti-corrosion coatings. Since 2019, he has also been head of plasma applications & market segment manager Battery. As a member of the company's extended management team, he will be responsible for sales and service, marketing, human resources and the development of the individual business segments. "I see great potential for Plasmatreat in the future in the areas of e-mobility and electronics, in which we expect strong international growth. In the battery sector, for example, we will continue to push ahead with particularly future-oriented topics such as thermal conductivity and insulation, as well as applications in the field of fuel cells. We at Plasmatreat want to be a reliable partner for our customers, helping to shape future production and processes," says Lukas Buske.

Christian Buske looks forward to leading the company in the enlarged, powerful team and emphasises: "Our claim is to support our customers worldwide optimally and from close proximity with German know-how, exciting innovations and the usual high-quality service. In order to ensure this in the future as a world market leader within a strongly growing company and to continue to drive the expansion of research & development and sales as well as the establishment of new subsidiaries, we have already filled the most important pillars for a successful future with the second generation."

Visitors and interested parties were given a compact introduction to atmospheric plasma technology at stand I65 in Hall 11. Plasmatreat experts explained what makes plasma applications a safe, efficient and environmentally friendly alternative to conventional surface treatments for plastics. In addition, attendees learned how plasma can be used to solve challenging material issues regarding bonding, painting, printing and sealing. Various plastic-specific application examples were presented on the stand – from a solar-powered racing car to the production and high-quality printing of a crumpled cup made of recycled plastic. Selective, but also large-area treatments with plasma were shown on various large components. www.plasmatreat.de
Top Companies

Plasmatreat
Research and industry in dialogue