16.09.2019 The ECOFLEX iSONIC welding booth from Sonotronic is presented at this year’s K (Hall 11, Stand A42) in a completely reworked design. 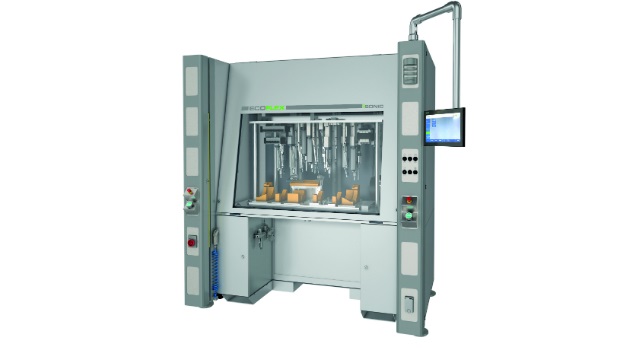 Its special feature is the work space in particular: individually tailored to the respective application it is now incorporated in the booth as an exchangeable tool cassette. The cassette can be replaced both from the operating side and from the back of the machine. Ergonomic working and loading is possible thanks to the large inspection window at the front. The standard NC sliding table, with a 400mm axis, enables the components to be positioned accurately and quickly at one or more welding stations.  Apart from the standard control elements, the functional columns to the right and left of the machine are also capable of being extended by freely configurable, customised push-buttons and switches by way of pre-defined slots. Whilst the touch panel, with its intuitive user guidance, is positioned so that it can be positioned to eye level, the electrical cabinet is accommodated in the lower area.

The ECOFLEX iSONIC ultrasonic welding booth is available in three different widths and is suitable for working small and medium-sized plastic components. It is also possible to upgrade the booth into an acoustic protection booth for noisy applications. The tool cassette is modular and equipped, according to application, with 20, 30 or 35kHz ultrasonic technology for flat surface, piercing and rivet joints Smaller punching applications are also possible. For this, SONOTRONIC uses its own highly developed ultrasonic components.

A series of new products

The new ECOFLEX iSONIC ranks amongst a series of new products, which the Karlsbad ultrasonic specialist is also exhibiting at K: The new USG iSONIC ultrasonic generators offer rapid, digital control of the welding process. Also new to the market is the DNP iSONIC ultrasonic handheld welding device, which has improved ergonomy and is now equipped with a rapid change function for the welding stack and sonotrode cooling. The NC iSONIC ultrasonic welding machine, with its servo-drive, is absolutely accurate for welding and can be flexibly incorporated in machines and assembly lines.